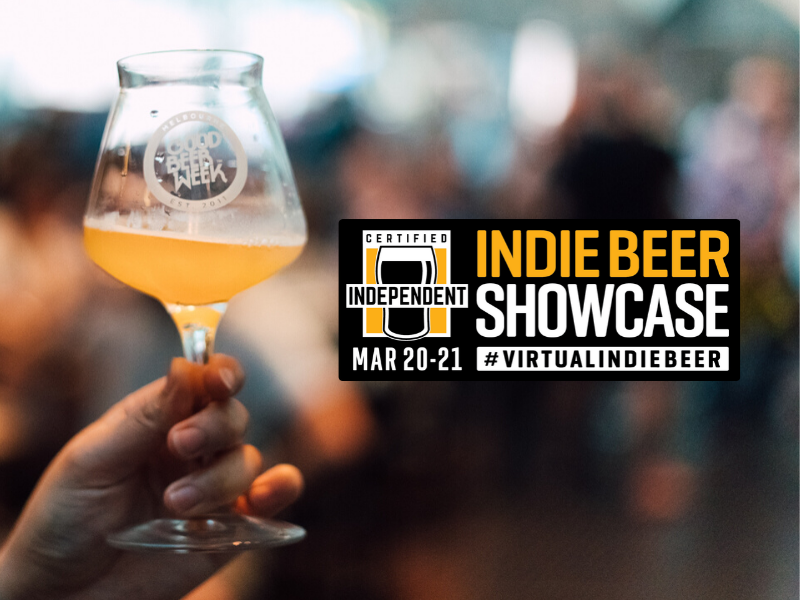 The Indie Showcase is POSTPONED but not cancelled. Ticket holders, check your emails for an email outlining the changes and what it means for you.

In the meantime, we put our heads together and came up with an idea to keep us connected while we are all isolated. Despite much of the world being indoors right now, that doesn’t mean some sort of show can’t go on! We wanted to bring a little beer joy back. So, we’re bringing the Showcase right to your couch (don't worry - we're still rescheduling when we can so hold on to your tix).

We’ve invited a handful of friends that were scheduled to do masterclasses at the Showcase to connect via video linkup, live streamed to you. We’ll be tasting and sharing some beers from each brewery’s range that are available now.

If you can’t find the particular beer mentioned, then don’t feel like you can’t hang out with us. We’d still love to have you! Just crack open a local indie beer, jump into the chat and tell us what you’re drinking.

Please note: you will need a Youtube account to view the streams, as they are age restricted. Plus you need to be logged in to participate.

Session One: Stomping Ground Brewery With Cassie O’Neill and Ashur Hall.
Australia’s first female Cicerone, and Stomping Ground head brewer join us to talk about two of their most popular beers, and what goes into them. Love hops? Love sour? Love chats with two of the most well regarded people in Aussie beer? Of course you do.

Go to Session One

Friday 20 March, 8pm (AEDT)
Session Two: Cellar Beer with Miro. Hosted by Good Beer Week co-founder Miro Bellini and IBA's Luke Robertson
Think of this as an online bottle share. Join in on the chat, or tweet @GoodBeerWeek with your cellar beer favourites, as Miro and Luke talk about storing and ageing beer, as they pull out some of their favourite old beer. Does it still taste good? If not, we’ll tell you why!

Tasting Beers: Something from your cellar!

Saturday 21 March, 2pm (AEDT)
Session Three: Wolf of the Willows with Scotty McKinnon
Join Scotty McKinnon (founder and head brewer) for an exploration into the world of hops. Hear the history, how they are used, and compare and contrast two beers displaying different ways in which hops are used: Wolf's pioneering XPA and their ode to the West Coast IPA's appropriately named 'Homage'.

Tasting Beers: XPA, IPA
Available from the brewery for Melbourne metro - order direct from this link before Friday 8am for a special heavily-discounted tasting pack (details below), or find at your favourite bottle shop.

Saturday 21 March, 3pm (AEDT)
Session Four: Molly Rose Brewing Co with Nic Sandery
Founder of Molly Rose, Nic Sandery, is online to tell us about farmhouse ferments. Two of his most recent releases are some of his best yet. Don’t take our word though, take it from James Smith, of the Crafty Pint, a lover of saison-style beers, who said: “I can't remember the last time I enjoyed one as much as Oh, Honey. Honey”

Wolf of the Willows Special Beer Offer:
As a special offer Wolf are offering a discounted mixed case specifically for Indie Showcase subscribers. For the heavily discounted price of $90 inc deliver, Wolf will personally deliver the following:

We’re trying to take a crappy situation and make it that little bit better by providing a good night in, with good beers and good content. After all, if you can’t come to us we’ll come to you.